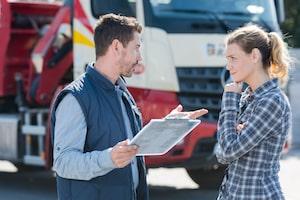 Throughout 2016 alone, a staggering 4,564 Americans lost their lives in car accidents involving large commercial trucks or buses. Despite the fact that all commercial truck drivers must go through extensive training programs to earn their commercial driver’s license (CDL), trucking companies consistently make poor hiring decisions, fail to adequately train their drivers, and routinely send out trucking fleets with improper maintenance. If a member of your family is injured in a truck accident, it is possible that the injuries were caused by the unsafe operation of the vehicle or the negligence of the truck company.

While many commercial truck collisions are the direct fault of the driver, these collisions may have been avoided with increased employee vetting and adequate training programs. Trucking companies are responsible for the training and treatment of their employees, and failing to properly train employees or treating employees unfairly is a direct form of company negligence. The most common forms of negligence include forcing drivers to drive more than the federally legal limit of 14 consecutive driving hours, insufficiently training drivers, and poor vehicle maintenance.

Despite nationwide initiatives to stop inebriated driving, one of the most dangerous forms of reckless commercial truck operation is drunk driving. Many commercial trucking companies will hire drivers previously convicted of DUI charges, as long as a certain amount of time has passed since the arrest. Although FMCSA regulations state that a CDL holder can be disqualified from commercial driving for life if convicted of multiple DUI charges, thousands of truck drivers still make the reckless decision to drive while under the influence of alcohol. The vast majority of trucking companies understand that hiring drivers with a history of inebriated driving is a direct form of negligence, yet companies continue to give irresponsible drivers an opportunity to get behind the wheel. Drivers convicted of multiple DUI charges should face difficult hurdles to make it back behind the wheel of standard motor vehicles, and they should never operate vehicles that can legally weigh up to 80,000 pounds.

At Pullano & Siporin, our number one goal is to ensure that you and your family receive the full compensation you deserve in the event of an injury. In the case of an accident involving a commercial truck, companies will aggressively fight to avoid paying for injuries suffered. Fortunately, our legal team has years of experience fighting against company negligence and reckless truck drivers. We have won multiple victories in these types of cases, including:

When trucking companies either hire workers with previous driving charges or fail to adequately prepare their drivers for the task of commercial truck driving, they are acting in a reckless and negligent manner. Fortunately, our legal team has experience fighting established trucking companies, and we are fully confident that we can help you receive the financial support you need to recover from any and all injuries suffered. To schedule a free consultation with a Lake County truck accident attorney, call us today at 312-551-1100.

A power company hangs its lines nearly 3½ feet below where regulations permit them. A tow truck driver, hired by the city to remove sand

Pullano & Siporin were featured in the Chicago Daily Law Bulletin in an article titled “Worker can sue power company”. Details of the article include

Turning the Page to a New Chapter—and a New Name

Since our firm was founded nearly a quarter-century ago, we’ve been known as the Pullano Law Offices—named after our founder, Rick Pullano, an “alumnus” of

The Law Offices of Richard L. Pullano obtained $2 million for a man that was severely injured when a delivery truck struck him while on

Send Us A Message