CYCLISTS ARE AT RISK OF SERIOUS INJURIES FROM COLLISIONS AND DOORING 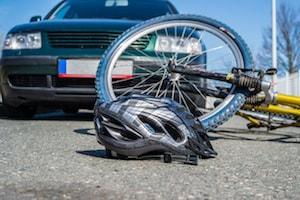 Cycling is a common form of exercise, recreation, and transportation in the Chicago area, especially in the summer months. However, while cycling may be a relaxing and enjoyable activity, it can be extremely dangerous. According to the Illinois Department of Transportation, there were 3,322 bicycle crashes in the state in 2015 alone.

Chicago and many other major cities have taken action toward making cycling safer for everyone. Bicycle lanes have been created to protect cyclists, pedestrians, and drivers alike. But even though cyclists are provided their own space on the road, serious and sometimes fatal bicycle accidents continue to happen daily.

Cycling injuries can occur anywhere on the body due to the lack of protection afforded to cyclists in a collision. According to the American Academy of Family Physicians, injuries to bicyclists can be broken down into two categories: acute trauma and overuse injuries.

Wearing a helmet is one of the best ways to protect yourself from injuries. Bicycle helmets reduce the risk of head injuries by 74 to 85 percent; however, their “overprotective” social stigma often steers people away from wearing one. Though bicycle injuries can happen to anyone, urban cyclists have a much higher risk for injury.

Because bike lanes run along the edge of the road in Chicago, accidents known as “doorings” occur daily. Dooring takes place when a cyclist crashes into an open car door. This often happens because the rider is caught off-guard by a sudden roadblock in their lane, due to a driver or passenger not checking for the presence of bicycles before exiting a vehicle. The Chicago Tribune reported that more than 300 cases of cyclists crashing into open car doors occurred in Chicago in 2015.

The Law Offices of Richard L. Pullano has a great deal of experience with dooring cases in Chicago. For example, the firm represented a woman from the north side who suffered a permanent injury after a parked car door was opened into her path while she was riding in the bike lane. Attorney Pullano secured an $800,000 settlement for the bicyclist to make up for the irreparable damage the woman suffered.

If you have been involved in a collision with a vehicle, a dooring injury caused by a distracted driver, or another bike injury caused by someone’s negligence, the Chicago bicycle accident attorneys at Pullano & Siporin can help you pursue compensation for your damages. We can assist you in ensuring that those who caused you harm will be held responsible and that you will receive the financial resources you need to recover from your injuries. Contact us at 312-551-1100 for a free consultation.

A power company hangs its lines nearly 3½ feet below where regulations permit them. A tow truck driver, hired by the city to remove sand

Pullano & Siporin were featured in the Chicago Daily Law Bulletin in an article titled “Worker can sue power company”. Details of the article include

Turning the Page to a New Chapter—and a New Name

Since our firm was founded nearly a quarter-century ago, we’ve been known as the Pullano Law Offices—named after our founder, Rick Pullano, an “alumnus” of

The Law Offices of Richard L. Pullano obtained $2 million for a man that was severely injured when a delivery truck struck him while on

Send Us A Message